For the second year in a row, I attended A Celebration of Harry Potter 2015 at Universal Orlando with the Central Florida Slug Club, the largest active adult Harry Potter fan club in the Southeastern United States, and one of the largest in the country.  While last year was memorable, this year was epic!  Everything went right for me.  It was unreal.  I don’t know who slipped Felix Felicis potion into my morning orange juice, but God bless them.   Luck was on my side.  Here are my luckiest moments of this magical weekend.

4. I got into the HP Celebration expo without standing in line for hours and hours.
On Saturday morning my plan was to wake up bright and early at 6am and leave my house in Tampa by 7am so that I could meet the club at Universal in Orlando by 8:30.   As the best intended plans go, I failed. My alarm didn’t go off and I woke up at 7:30.  I was an hour behind schedule.  Oh what I wouldn’t give for a flying car right about now!

I drove for an hour from Tampa to Orlando and then I waited in the line to get into the parking garage for what seemed like 10 years, but was probably about 30 minutes.  I was worried about the lines but it was as if everyone just got out of my way.  I had no line through the bag check line. I passed right through the front gate turnstiles line with absolutely no wait.  The group was already in line for the expo and they were close to the front.   I ran, robes flying behind me to try to catch up with them. Everyone allowed me to make my way through the line to meet up with my group without any trouble at all.  I made it just before our group was let inside!

3. I was able to buy my commemorative HP Celebration 2015 pin before they sold out!
This year they only sold the pins in the merchandise area inside of the expo.  You couldn’t purchase the pin in the other gift shops.  I  love all things Hogwarts Express related so I was very excited about this year’s design.  They sold out before the weekend was over so I was lucky to get one.

2.  I won the 31 disc Blu-ray collectible of all of the Harry Potter movies!

Universal hosted a House Pride pep rally for each of the house throughout the weekend.  I’m a proud Gryffindor and after watching the other houses, I was determined to show that I had the most Gryffindor spirit.  I decided that I was going to pull out everything I owned that represented Gryffindor.   My fellow Gryffindors in the Slug Club decided they would do the same.   One of us had to win.  We had already had winners from Hufflepuff and Ravenclaw so there was serious pressure.  I stayed up Saturday night planning my ensemble.

At the Gryffindor house pride meetup, we were there early enough to ensure we got up front so that we could be seen.  We were crest fallen when we saw that they had somehow hand-picked three cosplayers to go on stage for the spirit contest.  One was dressed in Hermione’s Yule Ball gown and the other 2 were cutsie Hogwarts students.   But no one was as ridiculously bold, brave, and daring in red and gold as me and the other Slug Club Gryffindors!

And then, the MC announced he would be picking one from the audience.  Yes!!  There was still hope.  Come on Felix…work your magic. He elicited screams and yells from the crowd.   I used my Gryffindor mug like a banner and jumped up and down hoping he would see me, and he did!  I was beckoned to come up on stage.  #Winning 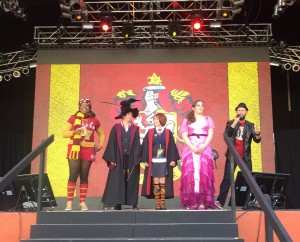 It was so much fun to be silly and play to the crowd.  After a little friendly crowd applause judging, the MC announced that me and the Hermione would both win the Blu-ray set.   Victory!!!!  The best part was having my Slug Club friends in the audience to cheer me on. 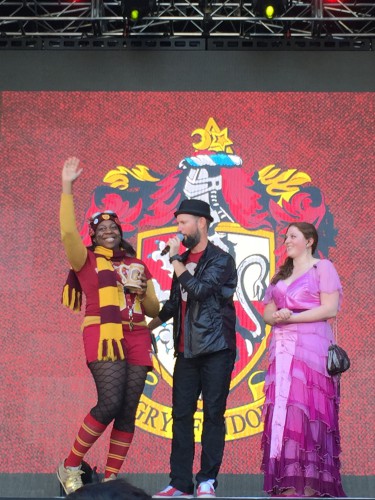 1. I was randomly picked to receive the special fan surprise at the Scholastic Muggle Wall.
On Saturday I got left behind when the Slug Club left the expo hall to go meet up for a group photo.  Before I could leave to try to catch up to them, I was stopped and asked if I wanted to participate in a surprise.  I had zero idea what the surprise would be.  I ended up being ambushed by the Weasley Twins, James and Oliver Phelps, after I signed the Muggle Wall.  Shock would be an understatement.   They are my favorite characters and this was truly a surreal moment. How could I be so lucky? 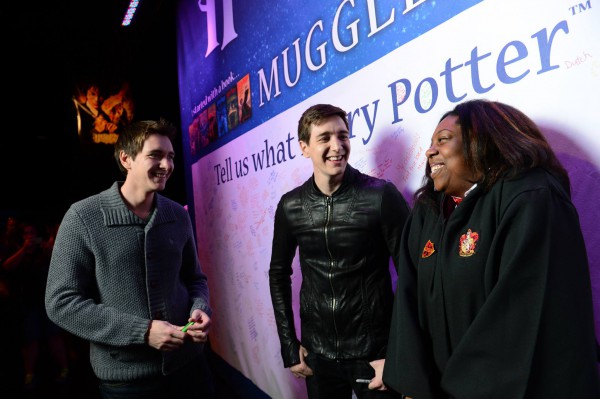 We chatted and they cracked jokes.  They are so down to earth.  I even got hugs! It’s a wonder I didn’t cry because I was feeling an overload of emotion.  Hands down this makes the top five experiences of my life.  You can read an even more in-depth account of that encounter in Holy Hogwarts, I Hugged a Weasley.

The only thing that could make this moment even better was getting a response on twitter from James Phelps when I wrote to thank them for being so nice when I met them.   That was truly special and he actually did remember me! 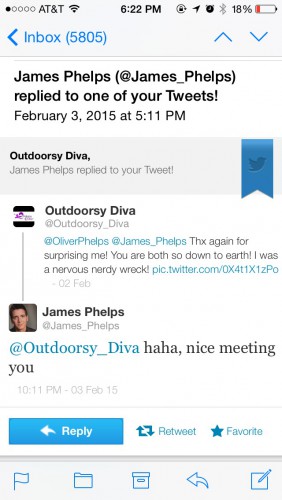 The Harry Potter series has been apart of my life for 14 years.  Having such a fortuitous weekend brought everything I’ve experienced during my time in this fandom full circle. 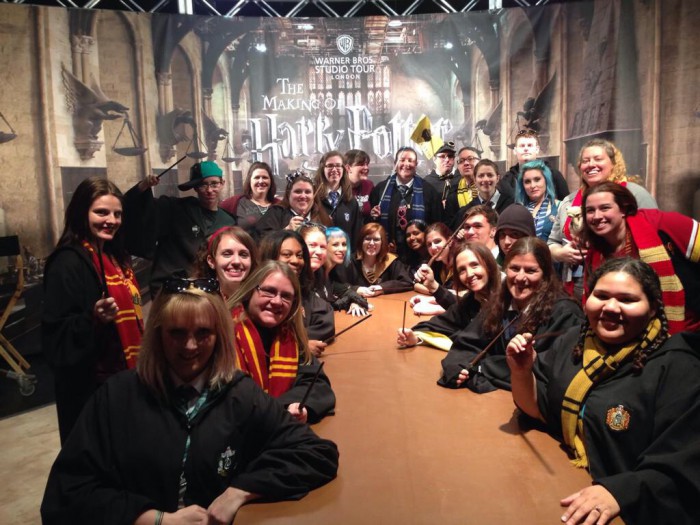